Should the Agricultural Use of

by Kathy Keatley Garvey
UC-Davis Dept. of Entomology and Nematology
A team of entomology graduate students from the University of California, Davis, successfully argued at the Entomological Society of America's recent student debates that a ban on the insecticides in agriculture “will not improve pollinator health or restore populations, based on current science. Neonicotinoids are important for control of many significant agricultural and veterinary pests. Part of the solution is to develop better regulations that will protect the health of pollinators and retain the use of an important IPM tool.” 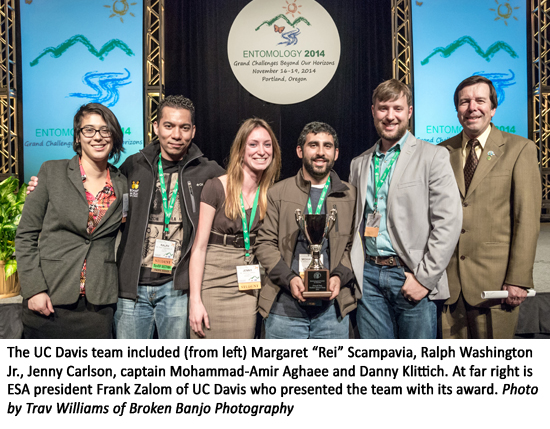 UC Davis won the debate, defeating Auburn University, Alabama, and then went on to win the overall ESA student debate championship for the second consecutive year.

“Neonicotinoids are important for control of many significant agricultural and veterinary pests,” team captain Mohammad-Amir Aghaee said at the onset. “Part of the solution is to develop better regulations that will protect the health of pollinators and retain the use of an important IPM (integrated pest management) tool.” The team also argued successfully that neonicotinoids (also known as neonics) are not all “created equal.”

The insecticide, chemically similar to nicotine, is implicated in the mass die-off of pollinators.  The European Union recently adopted a proposal to restrict the use of three pesticides belonging to the nenicotinoid family (clothianidin, imidacloprid and thiametoxam) for a period of two years.  In addition, the U.S. Fish and Wildlife Service announced that by January 2016, it will ban the use of seeds treated with neonicotinoid pesticides and the use of crops improved through biotechnology throughout the 150 million acres managed by the National Wildlife Refuge System.

ESA officials chose the debate topic and assigned UC Davis to debate the “con” side and Auburn University, the “pro” side. The Auburn team argued that neonicotinoids are causing the death of bees essential for pollinating our food crops, and that the use of neonicotinoids should end. The debates took place at the ESA's 62nd annual meeting, held in Portland, Ore.

ESA sponsors the lively, cross-examination-style student debates as an educational and entertaining component of its annual  meetings. The teams are given eight months to prepare. Team members must be enrolled in an entomology degree program (bachelor, masters or doctorate).   Each debate spans 45 minutes and includes a seven-minute statement by each team; cross-examinations; rebuttals; and questions from the judges and audience.
The UC Davis team cited three main points: The UC Davis team agreed that acute and chronic studies "have shown that neonics are toxic to honey bees and bumble bees (Blacquiere et al. 2012)" but argued that “all neonics are not created equal (Brown et al. 2014). They cited “inconsistent results with field-realistic doses (Cresswell et al. 2012)" and noted that “many other factors have been documented as contributing to pollinator decline (Epstein et al. 2012).”

It's not just insecticides that are killing bees, the UC Davis entomologists said. They listed the varroa mite (Varroa destructor), considered by U.S. beekeepers as Public Enemy No. 1; vectored pathogens, acaricides, antibiotics and fungicides directly added to the colony; pathogens such as American foulbrood and Nosema bombi); inadequate honey bee nutrition; insufficient food substitute: habitat fragmentation; and land-use changes and the increasing demand for pollination changes.

The UC Davis entomologists recommended that In its summary statement, the UC Davis team said: “There is NO definitive scientific evidence that neonicotinoids are the primary cause of pollinator declines. Neonicotinoids are important reduced risk pesticides for management of some of our most damaging pests. Neonicotinoids should be better regulated, not banned." They concluded: “Given the current state of knowledge, banning neonicotinoids is a premature and disproportionate response to a complex issue. This requires holistic scientific inquiry and interpretation, and cooperation among stakeholders. Any changes must be based on science rather than opinion, current trends, or fear.”

The Auburn team, or the pro-team, opened the debate with “Neonicotinoids are causing the death of bees essential for pollinating our food crops. The use of neonicotinoids should end.”

Why? They outlined six key points: Expanding on the fact that this is “a critical time for pollinators in the United States,” the Auburn team pointed out: The Auburn team keyed in on lethal and sublethal effects of neonics:  synergistic interactions with other pesticides, including DMI (demethylation inhibitor) fungicides; increased susceptibility to pathogens (Nosema spp.); decrease in foraging success; decrease in overwintering queen survival; learning impairment consequences; and reproductive inhibition.

The Alabama-based team also called attention to prevalence and exposure to neonicotinoids. They discussed the neonicotinoid residues found on bee-pollinated crops and plants by various means of exposure: seed coating; foliar spray, soil drench, trunk injections; length of residue (soil vs. foliage and length of bee exposure); and single exposures resulting in season-long impacts. They also said the multiple means of exposure due to application can lead to multiple routes of exposure within bees: via pollen, nectar, guttation fluid and extrafloral nectaries.

In addition, the Auburn entomologists argued that new and novel modes of action and classes of insecticides are emerging. leading to alternative options, and that the banning of neonics in agriculture won't destroy agriculture. They also discussed the restriction of organophosphate use with the adoption of FQPA in 1996. If neonics were banned, they said, this could open the door “for stronger and more reliable risk assessment” and potentially, "the adoption of integrated pest management (IPM) tactics."

In their concluding statement, the Auburn team said that current tools for risk assessment may not be adequate; and that limiting neonicotinoid use will not harm agriculture--"it will open the door for more sustainable agriculture and new insecticides." They emphasized that we must save our pollinators, especially in the United States. "The United States is a special case--globally there is an increase in bee colonies; however, the United States is at a critical point at which bee pollination services are being threatened irreversibly."

One of the several swaying arguments that led to UC Davis winning the debate was that not all neonics are created equal, and thus, they should not all be lumped together as "an equal" and all be banned.

Mussen, who retired in June after 38 years of service, met periodically with the UC Davis team at its practices. He’s frequently asked if neonics are the primary cause of CCD.  "Neonics are only one of the classes of pesticide residues that we frequently find in analyses of adult bees, beeswax and stored pollens.  We encounter CCD in colonies in which no neonicotinoid residues can be found, and we find colonies surviving year after year with measurable residues of neonicotinoids in the hives.  Obviously, neonicotinoids do not appear to be 'the primary' cause of CCD." 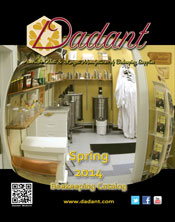