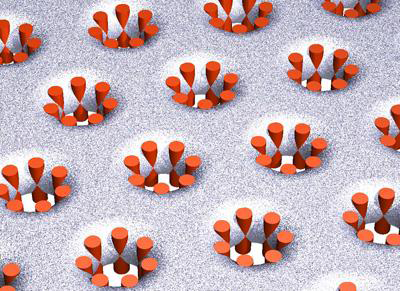 This artist's visualization shows the structure of stable pores that are created by melittin peptides (orange) in a 3-D crystalline membrane. The structure shown here, which was predicted by Rice physicist Huey Huang in 2000, was confirmed in an experimental paper this week in the Proceedings of the National Academy of Sciences.

HOUSTON -- (Aug. 14, 2013) -- A new study by Rice University biophysicists offers the most comprehensive picture yet of the molecular-level action of melittin, the principal toxin in bee venom. The research could aid in the development of new drugs that use a similar mechanism as melittin's to attack cancer and bacteria.

The study appears this week in the Proceedings of the National Academy of Sciences.

Melittin does its damage by penetrating the outer walls of cells and opening pores that allow the contents of the cell to escape. At low concentrations, melittin forms transient pores. At higher concentrations, the pores become stable and remain open, and at still higher doses, the cell membrane dissolves altogether.

"This strategy of opening holes in the cell membrane is employed by a great number of host-defense antimicrobial peptides, many of which have been discovered over the past 30 years," said Rice's Huey Huang, the lead investigator of the study. "People are interested in using these peptides to fight cancer and other diseases, in part because organisms cannot change the makeup of their membrane, so it would be very difficult for them to develop resistance to such drugs."

But the clinical use of the compounds is complicated by the lack of consensus about how the peptides work. For example, scientists have struggled to explain how different concentrations of melittin could yield such dramatically different effects, said Huang, Rice's Sam and Helen Worden Professor of Physics and Astronomy.

In the new study, Huang and Rice graduate student Tzu-Lin Sun partnered with colleagues Ming-Tao Lee at the National Synchrotron Radiation Research Center (NSRRC) in Hsinchu, Taiwan, and with Wei-Chin Hung at the Republic of China Military Academy in Fengshan, Taiwan. The team used a combination of experiments to zero in on the molecular activity of melittin at the "minimal inhibitory concentration" (MIC), the lowest concentration that's been shown to slow the growth of target cell populations. The MIC for melittin is a dose that results in stable pore formation, rather than complete dissolution of the membrane.

"We want to understand how pore formation works at this critical concentration, including both at the molecular scale -- what are the shapes of the pores themselves -- and the cellular scale -- how are the pores arranged and distributed over the surface of the membrane," Huang said.

To find the answer, the team correlated the results of two different types of experiments. In the first type, which was conducted at Rice, the team used confocal microscopy to film "giant unilamellar vesicles" (GUVs), synthetic membrane-enclosed structures that are about the same size as a living cell. The outer surface of the GUV became green when bound to melittin that was labeled with a fluorescent dye. The GUV was filled with a solution that contained a red fluorescent dye.

In the experiments, Sun used a needle-like glass pipette to partially aspirate and grab dye-filled GUVs, which were then placed into a melittin-infused solution beneath the microscope. Time-lapse videos of the experiments show that dye-labeled melittin begins sticking to the surface of the GUV within seconds. Within about two minutes, so much melittin binds to the outside of the GUV that the outer surface area increases by up to 4.5 percent. At a critical threshold, the expanding surface changes configuration to accommodate the increased load of melittin. At this point, pores form across the entire surface of the GUV. On the video, the bright red dye within the GUV rapidly leaks out at this critical pore-forming stage.

"The experiment shows how the MIC brings about a new physical state that results in cell death," Huang said. "By correlating these findings with other data about the molecular characteristics of the pores themselves, we get the first complete picture of the process of stable, melittin-induced pore formation."

The molecular level data came from a series of X-ray diffraction experiments performed by Lee at NSRRC. In those experiments, samples of multilayered membranes were bombarded with X-rays. Each layer contained an ordered arrangement of pores, and the stacked layers contained a 3-D lattice of regularly arranged pores. By examining how X-rays scattered away from the sample, Lee and Hung were able to determine the precise contours of the melittin-induced pores.


Click here  to see a digital sample of the American Bee Journal. 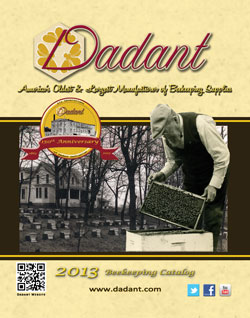