Copy
Email not displaying correctly? View it in your browser. 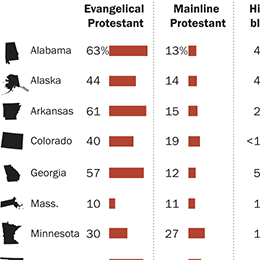 Religious groups rarely vote as a fully unified bloc. For instance, in the South Carolina Republican primary, white evangelical Christian voters were split among those who voted for Donald Trump (34%), Ted Cruz (26%), Marco Rubio (21%) and others, according to exit polls. But looking at the religious makeup of individual states, and at each party’s potential voters within a particular state, can still help in understanding the electoral landscape. Indeed, as voters for one or both parties in 12 states prepare to cast ballots or caucus on March 1 – Super Tuesday – we looked at data from Pew Research Center’s 2014 Religious Landscape Study to help shed light on who might vote and their potential motivations.
Read More >>
Fact Tank
U.S. religious groups and their political leanings 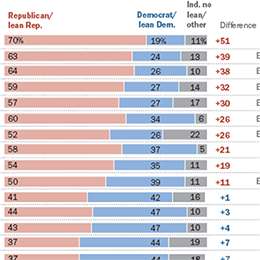 Mormons are the most heavily Republican-leaning religious group in the U.S., while a pair of major historically black Protestant denominations – the African Methodist Episcopal (AME) Church and the National Baptist Convention – are two of the most reliably Democratic groups, according to data from Pew Research Center’s 2014 Religious Landscape Study. A Fact Tank analysis looks at the political preferences of 30 religious groups, which include Protestant denominations, other religious groups and three categories of people who are religiously unaffiliated.  Read More >>
Media Mentions
The true number of evangelical votes depends on who you ask
Feb. 21 - NPR
NPR interviews experts, including Pew Research Center's Associate Director of Religion Research Gregory A. Smith, about evangelical voters in the United States.
In the News
Egypt sentences 4 Coptic teenagers for contempt of Islam
Feb. 25 - The Associated Press

Abortion clinics are closing at a record pace
Feb. 24 - Bloomberg

Islamic State gets millions in ransom for abducted Christians
Feb. 22 - The Associated Press

At funeral Mass, Justice Scalia eulogized as a man of faith as well as law
Feb. 20 - USA TODAY

* SOME WEBSITES MAY REQUIRE A PAID SUBSCRIPTION